The park had been neglected. Earlier this year the parks department removed the backstop and fence around what used to be a baseball diamond. "No kids play there anymore" I was told. Thanks to Alderman Freeman Bosley Sr. and Charles Lunsford a new backstop and fence have been put up. On April 10 we gathered there with 18 kids from the area and the free Hyde Park neighborhood baseball league was born. A week later we gathered again with a sod cutter to reclaim the infield! 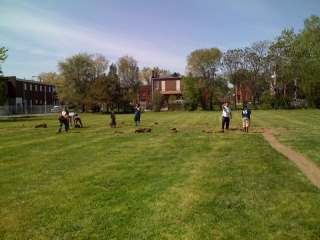 The sod was removed and placed on a vacant city lot across the street. 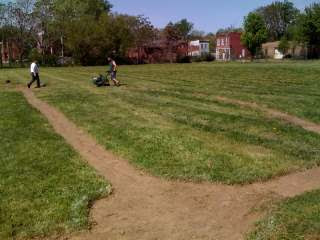 This weekend 25 kids showed up to play America's sport. The dirt is exposed. The backstop is up. The equipment was donated. The volunteer coaches were ready. This weekend will be the first game on the new field the kids helped us to build. That farmer in Iowa once said if you build it they will come. He was right. Satruday at 2pm you will once again hear those famous words at Windsor Park on the corner of Blair and Angelica in Hyde Park - Play Ball!
Posted by Dr. Terry M. Goodwin at 4:38 PM No comments:

What we hoped would be the future home of the Opportunity Center's Coffee and Ice Cream Shop in Hyde Park, lost it's battle with the elements last week. 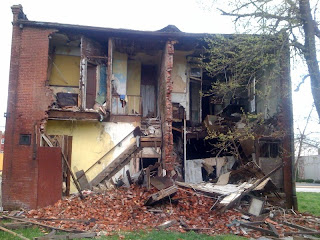 The building now has lost the back wall and the front is held up by bracing. The estimate for repair had risen by 15% prior to the collapse. It appears we may have to look for another suitable property for this phase of our efforts.
Posted by Dr. Terry M. Goodwin at 5:58 AM No comments: