On June 11, volunteers from GreenTree Church helped us with some community clean-up. We have partnered with GreenTree on a number of projects, assisted greatly by our friends Bill Duggan and Nancy Prott. Bill and Nancy believe in what we're doing here and have encouraged others to work with us.

We have been turning our attention to community clean-ups because there is such huge need there. There is frequent illegal dumping occurring in our neighborhood. There are many neglected vacant properties and lots, and simply a lot of maintenance needed for things like signs, sidewalks, and streetlights. We connected with a few city departments to help out with the clean-up and bring attention to the other needs of the neighborhood. We see this as a vital part of Pastoring our Community. We don't have to do everything, or re-invent everything. City services exist for a reason, and we should utilize them whenever possible. This puts more eyes, attention, and resources on the area in general, and helps problems be brought to light. It also can clear up communication between residents and city departments and officials. 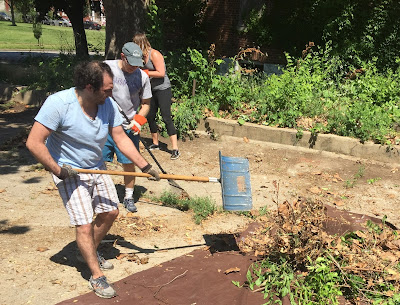 All this is a natural living out of the Gospel. The Gospel is about God's design, His heart, following wherever He leads. The “currency” of the Kingdom, if there could be such a thing, is love. And Jesus said the greatest form of love is sacrificial. What is it to a man if he does a good deed knowing he will be repaid, or to love a friend that has always been kind? Those are easy actions. The Gospel calls us out of an easy, self-centered life, and into a life of sacrificial love where the nations, and even our enemies, are blessed. It is always pointing to something bigger than ourselves.

But back to the work. One prevailing aspect of the day was the HEAT. We didn't break 100, but the heat and humidity started early and didn't let up. That didn't slow us down too much.

We had two vacant lots designated for brush and bulk trash. We began moving the debris to those locations. We did a lot of trimming along the alley. There were weeds, overgrown trees, and simply all kinds of mess clogging up the space and making it appear unkempt.

We had weed trimmers, pruners, chainsaws, blowers, hatchets, shovels, and rakes. We even used a large tarp to help move the loose leaves and brush.

It took 11 people two and a half hours to clear one block of an alley. Just imagine if this were repeated across the city, every weekend. While it still may appear to be a “drop in the bucket”, it might be enough to initiate so much more.

The connection between trash and crime has been well documented (here's one study http://newsroom.ucla.edu/releases/UCLA-Study-Finds-Trash-Graffiti-1469). This alley is an excellent example. Besides physical evidence of crimes (needles, etc), there have been shots fired along the alley, and of course the dumping itself. Most poignantly, a car involved in a downtown murder/carjacking was dumped in this very alley. The trash continues to communicate to people that no one cares, no one is watching, none of this matters.

Unfortunately, about 4 days after the group left, someone else dumped construction debris in the alley (luckily, on top of a pile of brush that has already been reported to the city for removal). This was frustrating. A few months ago, we hosted a different volunteer group. After cleaning this very alley, one of the volunteers asked, “Isn't some of this work meaningless?” Now, she meant it in the best way possible. I don't think she was being critical or judgmental, but was trying to see how picking up trash fit in to what we do. So is it meaningless? In some ways, sure. There will always be more trash. There will continue to be selfish and inconsiderate people. Weeds will grow back. But even Jesus said we will always have the poor among us, and I certainly don't take that as a reason to cease ministering to them.

No. It is not meaningless. We were able to unite groups of believers into an act of selfless service...sacrificial love. This alone declares that the neighborhood is not a dumping ground or a wasteland. We cooperated with city services and got attention and resources to the area, and continued to open lines of communication with them. And we did clean up the place, which is meaningful not only to residents that live along it, but for the kids going to and from the elementary school located at the end of the alley.


Sun Ministries will be hosting more workdays this year. To get involved, check our facebook to sign up and stay informed, or email Jason at jason@sunministries.org 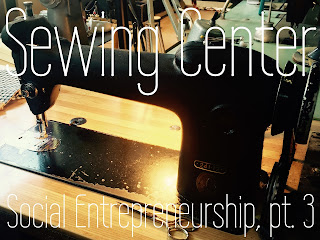 Our sewing center is located in the upper level of the Opportunity Center at 1515 Newhouse. It was the first business we moved to our target neighborhood of Hyde Park. We started sewing products at the suggestion of Chris at Picasso's Coffee House, one of our first supporters. He was selling messenger bags made from recycled burlap coffee sacs when his source left the area. We adjusted the design and started sewing them in our house in the suburbs. We could only do this because Suzette, Executive Director Terry Goodwin's wife, was already an excellent seamstress.

When we began making bags, we were looking for businesses to start. But what would work in this setting? What would work with our existing skill sets? We knew we had to provide employment and supply our own income. Through starting businesses, we become less dependent on outside funding. We can support ourselves with the work of our hands. We didn't set out to be involved in social entrepreneurship. We didn't even set out to make bags (or have a wood shop, for that matter). We were looking for solutions to problems, and walking through opened doors of opportunity. Along the way, we encountered questions and answers we had never thought of. How do you empower people to minister? How do you create space that allows people to overcome obstacles? How do you use the work of your hands to build the Kingdom? How do you move someone from being surrounded by chaos to becoming a great employee?

In the beginning, we were sourcing bags from the local roasters in St. Louis and purchasing material at fabric stores. Eventually, we were connected with Charity Sharity, which gathers craft materials and disperses them to local charities and non-profit organizations. So now, all our fabric and other materials are free. This greatly decreases the overhead for producing the bags.

Initially, we did all the work of making bags ourselves. We had never managed a business like this before. We had never made bags like this before. Once, when we received a large order, Suzette had to teach all of us to sew, and we did from the time we got up until we went to bed. This season of the business helped us all better understand the product and labor involved, and certainly showed us how to work together. Eventually, we became better at managing production, and were able to employ a few people in the space.

We started by selling our bags at craft shows and Earth Day events. This gave us great opportunity to talk with people about our mission. Later, we took the bags to CoffeeFest, a national tradeshow for the coffee industry. We now have retailers in several states and Canada. Everywhere a bag goes, it tells a bit of the story of Sun Ministries.

The Sewing Center has also experimented with other products, including paper, jewelry, and book covers. While we have established our regular items, we are still looking to future possibilities.

As mentioned in our previous blog, the sewing center space used to be the home of our missionaries before we bought the Leadership Center. When we moved in, there was no climate control, kitchen, or shower. There was no privacy. In the winter it got very cold. In the summer, it got very hot. Living in this environment, with close quarters and no escape, forced us to deal with relationship issues. We had to learn to work together and communicate. The thing that helped us is that we were all united in vision to accomplish the work. We knew what God had called us to, and that our work was doing more than producing bags. We were laying foundation for opportunity and hope. The Sewing Center has since been painted, insulated, and organized. A finished bathroom and office have been added. Extra lighting, air conditioners, and ceiling fans have been installed. We enclosed the top of the staircase to keep out noise from the woodshop. It is now a much more pleasant place to work.

One aspect that makes the Sewing Center special is that it allows participation from home. We've sent fabric and sewing machines home with ladies to make products. This is helpful for single mothers or other people with circumstances that would prevent them from coming in to work every day.

Through the sewing center and other endeavors, God is showing us that He has a purpose for our creativity and skill. In the Bible, God sent His spirit upon His people to be able to perform many crafts and creative works in order to build the tabernacle. We see God continue to do this. He has given us creativity and skill to work with Him to create products. We can express our selves and what He does through different materials, whether they be burlap, fabric, or wood. Utilizing repurposed materials not only lowers our overhead and helps us care for the earth, but it is a fitting metaphor for the hope God is bringing here. He is providing a second chance. He is coming alongside people to make them into something new, wonderful, useful, and whole.

Read Social Entrepreneurship, part 2 - Wood Shop
Posted by Jason at 12:00 AM No comments: