When God Gives a Vision ...

In early 2009 God gave me a vision. Not the "hey I see an angel" vision but an outline of what He wanted me to do. The vision came to me quickly in one day. I wrote out a 5 year plan and it included 4 major elements. The plan was to go to the inner-cities of America, starting in North St. Louis, and bring renewal, reformation, and revival to these areas.

The main components were for a church that operated outside the traditional church structures we see in America. This church is lead by missionaries and is not a part of Sun Ministries yet it is a part of the plan God gave me. The other 3 are under Sun Ministries and include an Opportunity Center to help bring income, jobs, and skill training. A Leadership Center to help recruit, train, and relocate young leaders to join the work. A new concept called the Narrow Gate that would address homelessness in a life-on-life way.

In December of 2009 the Opportunity Center was donated to us by the Helbling family. It opened in May 2010. In December of 2011 we purchased the Leadership Center. It opened in March of 2012. In April of 2012 we are receiving a donation from First National Bank that will become our first Narrow Gate home. It is a 5-family unit across the park from the Leadership Center. All three facilities are within 2 blocks of each other.

God is at work here doing something unique and His plan is going forward. If you would like to become a part of it we would love to have you. You can contact me directly to become a part of our church or to volunteer in our ministries. A major work has started here in North St. Louis and you have a chance to be a part of it. 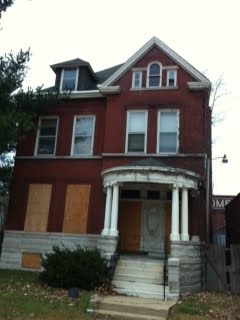 The Leadership Center is a place where Sun Ministries' missionary recruits and candidates stay while deciding if they are called to this work. It will serve as temporary housing for those who are relocating to the area to join our work.

Missionary Recruits are those who have heard of our work and are exploring it further. They may only stay for a day or a weekend. Candidates have answered the call to be a full time missionary and will stay here with us while permanent housing is prepared for them. The Leadership Center serves as the permanent housing for the Executive Director and his family.

This house is an essential part of the plan God laid out for us in 2009. It was there from the beginning. God provided it for us in December of 2011. We completed it 2 weeks ago and it is already fully occupied.

As we begin to move the current candidates into permanent housing we are sure God will keep the Leadership Center full of new missionaries.
Posted by Dr. Terry M. Goodwin at 10:39 AM No comments: