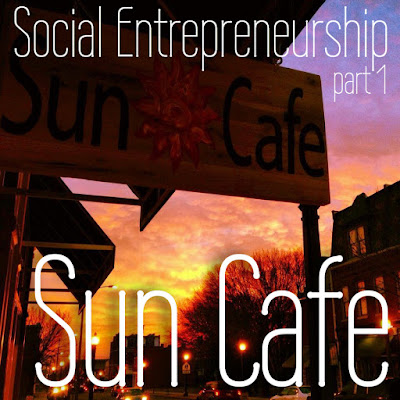 Our previous blog discussed our perspective on Social Entrepreneurship. We will continue this through examining each of our social enterprises, starting with Sun Cafe.

The vision of Sun Cafe has been with us since we first began the Isaiah 61 Initiative in early 2009. Our plan was to have a coffee and ice cream shop that could employ people and provide hospitality. As we pursued that goal, it became clear that the cafe was not the business with which to start. Instead, we focused on our wood shop and sewing center, and began the never-ending work of understanding what God had called us to.

However, the vision was still with us, and we knocked ideas around in the midst of all our other projects. Eventually, we were approached by a developer who offered us an amazing location at Blair and Salisbury, two blocks off I-70, in the first floor of a three-story commercial live-over. The building had been vacant for decades and was in terrible condition. When we first entered the space, we could look down through a hole in the floor and see the dirt of the basement, and look up and see blue sky.

This started a lengthy and convoluted process of really developing the nature and goals of the cafe. Starting a restaurant is not easy, and it is one of the riskier businesses to start from scratch. None of us had managed a restaurant, although most of us had food service experience.

We discussed the menu, which began as a simple list of some of our favorite foods, exploded into an international selection, and eventually settled down into something similar to most diners, but with a few house specialties thrown in (such as the Louie, cornmeal pancakes, and the dirty mug). Some of our own family recipes were even included. Of course, we had a full coffee menu, including espresso drinks and pour-over coffee. Desserts included ice cream and baked goods.

The décor was intended to represent the history and future of the neighborhood. We wanted to mix industrial and Victorian elements, with a color scheme that brought warmth and hearkened to our love of coffee. We put in a stage so that we could bring musicians and other artistic acts into the neighborhood. We left wall space for displaying visual arts.

As I mentioned, the building itself needed a lot of work, and the blueprints saw numerous revisions. The rehab of the building took over two years and gave us time to develop the idea of the cafe, source equipment, and mature our existing projects. We finally opened in February of 2014, initially by simply taking down the paper on the windows (we had a “grand opening” a couple weeks later). We were assisted by equipment donations, flooring donations, some favors from friends and partners, and a lot of hard work. We finished out the space, including painting the walls, installing the flooring, building our bar, bakery case, and chairs, and putting finishing touches on the place.

However, these are all simply brick-and-mortar issues. The real story of Sun Cafe is in its very purpose. Sun Cafe exists to create a hub for connecting, serving, casting vision and providing hospitality. As mentioned in previous blogs, our businesses support the ministry as well as provide employment environments. However, each business also takes part in the rebuilding of Isaiah 61. Not only are buildings being renewed, but economy is being built up, and hope restored. We may be biased, but Sun Cafe is a nice space. We wanted to stand against the physical decay and negative attitudes over the area by making a beautiful and welcoming environment. The cafe brings people, and money, from outside the area into our neighborhood. We've hosted celebrations and discussions. We often have music to enjoy.

Sun Cafe definitely made the work of Sun Ministries very public. It has served as a connecting point with neighborhood residents, government officials, non-profits, churches, artists, police, and families. It certainly put us face to face with many people, and opened up opportunity to cast vision.

The cafe has many challenges. It was our first business to have set hours. It is in very close quarters with the general public. The kitchen is always a stressful place. It contains lots of big equipment requiring regular maintenance. And like I said, we lacked restaurant management experience. Add all that on top of running four other businesses and trying to take on ministry projects, and you have quite the work load. While we've had our bumps, we are hopeful that the cafe can be a positive environment for our employees and customers. We plan to utilize its public nature to promote more community organization and progress. We host regular ServSafe certification courses for our employees and the public.

Besides offering food, coffee, and ice cream, Sun Cafe also does catering. We host meetings and parties. And we're open to other creative partnerships for utilizing our space and services.

You can learn more about Sun Cafe by visiting our website, or checking out our facebook and twitter  feeds. You can also visit the Isaiah 61 Initiative site to read some different perspective on the purpose of the cafe.