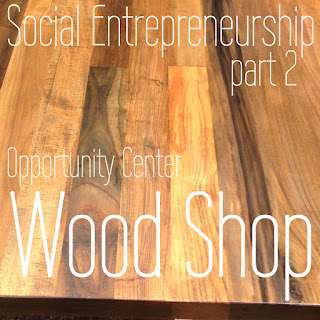 We will continue discussing social entrepreneurship by looking at our wood shop.

The building that contains our wood shop, located at 1515 Newhouse, has quite the story. Originally, it housed a printing company. Starting in the 60's, G. W. Helbling and Sons moved in. They produced screens for silk screeners. It was a family business. One of the elder Helblings was well-known for being able to produce the smallest font size in the area, because at that time, lettering was hand cut.

In early 2009, we began walking the Hyde Park neighborhood, praying and picking up trash. Occasionally, we would meet people. We knew God had called us here, but we were certainly strangers. At the time, we would regularly pray and fast, asking God to lead us in what He was building. We were sewing and doing wood working at one of our homes in the suburbs. We didn't know what we would do as winter approached. So in November, we told God our concerns. We can't pick up trash when snow is covering the ground. There's no public restroom to use. We know we don't need facilities for ministry, but we don't know what to do.

A few days later we were back in the neighborhood, eating at the only restaurant in Hyde Park. Terry, our executive director, was explaining to the waitress how we were having trouble trying to build deck chairs in his garage when we didn't even have a work bench. About a week later, she called Terry and told him someone was selling some workbenches. Not long after, Terry drove up to 1515 Newhouse and met Tim Helbling for the first time.

After some pleasantries, and realizing the work benches were far too large for us to use (they were constructed inside the shop), Tim asked Terry what he was up to. Terry told him about what Sun Ministries planned to do, living out the call of Isaiah 61, rebuilding ancient ruins. Tim remarked that Terry was the most optimistic person he knew, and offered to sell Terry his building. Before Terry could answer, Tim laughed and said he could either let it rot, or give it to someone who could use it. “If I give it to you, will you use it?” Of course. “And how about all these wood working tools?” Definitely.

But why were we doing woodworking to begin with? We were inspired by a man pastoring his community in Kigali, Rwanda. He was using sewing and woodworking to provide jobs for women and orphans, moving them from homelessness and sex trafficking to a steady livelihood. We learned early on while walking the streets that there is not a lack of Jesus being represented or preached. “I can get Jesus from my grandma,” remarked one kid. “I need a job.”

While we had planned to have social enterprises (businesses), this remark, and Eugene's work, solidified the goal to create businesses that could employ people with multiple obstacles and minister to their physical needs, while we proclaim and demonstrate the Gospel. The Good News is not simply about salvation. It is the Good News of the Kingdom where the poor and orphans are cared for, where humanity functions more like a living organism, and God's glory is like a light in a dark place. This is not done by words alone, but by sacrificial acts of love and service.

We started with basic wood products, buying lumber from big box stores. Eventually, we were convinced by one missionary's father to check out some pallets, and this transformed our wood shop. We now had free (although labor intensive) wood.

So now that we had a woodshop, a few product designs, and free lumber, we still didn't quite have a business, and certainly didn't have full understanding of how to utilize it to bring opportunity. We tried a work re-entry program, partnering with another non-profit organization. That was eye opening, to say the least. After that, we were convinced that we needed to establish our foundation. We needed to create a work space, design specific products, develop training, and learn the skills ourselves.

Since then, the woodshop has seen a number of people come through. It has proven to be a difficult place to employ people. It requires math skills, intuition, and extreme attention and safety due to the dangerous power tools. It has also laid the groundwork for our maintenance services, as it gave us the environment to learn how to use saws, drills, hammers, etc.

The woodshop established us firmly in the Hyde Park neighborhood. Now that we had a work place, and work to do, we were here much more often, usually with the doors wide open. Eventually, we moved in to the upper level while we continued to look for housing, and then rehabilitated the house we finally did find. We have made numerous items for charitable auctions, fixed widows' stairs, installed cafe bar fronts, and of course, built all our own tables and chairs for Sun Cafe. Our commercial furniture can be seen in several local coffee shops, as well as some further out, as we've gotten customers from places like Kansas and Wisconsin.

The woodshop continues to evolve. Having started from ground zero concerning both skill and tools, we've come a long way. We are developing and stabilizing product lines, exploring marketing, and continuing to transform the space into a safe, efficient, work environment.

To see examples of our past work, visit one of the posts below:
Recycled Pallets
Recycled Pallet Furniture Continues
Pallets and Pews
New Pallet Products
More Pews